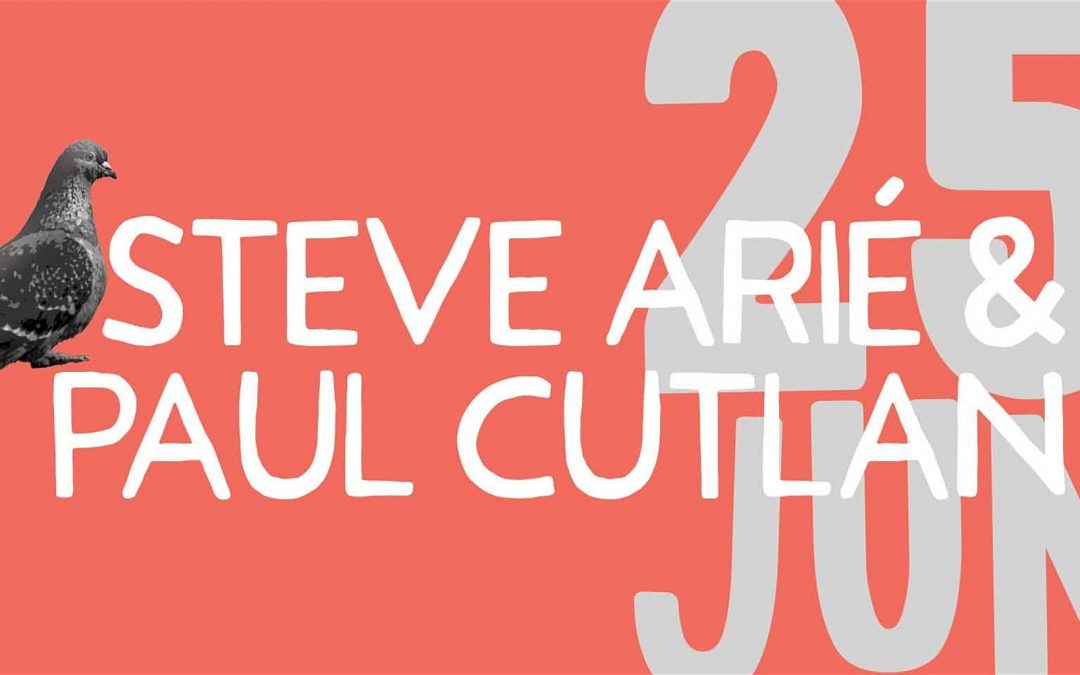 ‘Music in the Mountains’ & ‘Pigeon Lane @ Gallery ONE88’ have teamed up to bring you the Blue Mountain’s newest monthly jazz series – ‘Chasin’ the bird’. It’s home, Pigeon Lane, is one of Katoomba’s best-kept secrets – it’s not big, and you wouldn’t know where it was unless someone pointed it out to you, however, it’s got all the makings of a New York basement jazz club. The vibe is cool, it’s intimate (you won’t quite be knocking elbows . . . but it will be close) and you will be there to be absorbed by the music. Soak in the magic on the last Thursday of the month at Katoomba’s very own ‘Birdland’.

For this performance, the one and only Steve Arié will be joining us with multi-instrumentalist, Paul Cutlan. This will be a blast!!!

Steve Arié:
Sydney based jazz musician Steve Arié is a rare bird on the jazz scene. After more than 25 years as one of the most in-demand jazz double bass players, he has reinvented himself as a quirky vocalist and alto saxophonist with more than a nod to the styles of Chet Baker and Paul Desmond.

Paul Cutlan:
Paul’s uniquely expressive voice as a multi-instrumentalist and composer is informed by many styles, including contemporary classical music, world music and jazz.

He graduated from the Tasmanian Conservatorium of Music in 1987 with Honours in Composition. Orchestral performance experience includes the Tasmanian and Sydney Symphony Orchestras and the Australian Opera and Ballet Orchestra.

Paul is a long-standing member of the Australian Art Orchestra and ARIA winning world-music group MARA! With these groups, he has recorded numerous CDs and has frequently toured Europe, North America, Mexico and Asia.

He composed and performed for the acclaimed theatre production Birth of the Cool for the 2003 Sydney Festival, with subsequent seasons in Edinburgh and Germany.

Recent performances include Sydney and New York seasons of “Diary of a Madman”, concerts with Gurrumul and the SSO, his acting debut in “Rosencrantz and Guildenstern are Dead” for Sydney Theatre Company and Timeline with Australian Chamber Orchestra and the Presets.

Recent compositions aim for a synergy between composed music and the spontaneity of improvised elements. Commissions include works for the Sydney Festival, Ars Musica Australis and Aurora New Music Festival. He recently received his Master of Music in Composition from Sydney University.

How do I find Pigeon Lane?:
You don’t enter through Gallery ONE88 – every good journey starts with the unexpected. Take a stroll down Beverly Place in Katoomba, a.k.a. Art Street, and whilst you’re enjoying the everchanging street art, you will find the entrance behind Gallery ONE88.

Will there be food & drinks available?:
There is a full cafe just upstairs in Gallery ONE88, so dinner, coffee, cake & soft drinks will be available on the night. When you arrive, head upstairs to the cafe and put in an order for dinner, and your meal will be ready and waiting for you during the intermission. There will also be an opportunity for coffee and cake after the show.

What about a bar?:
Pigeon Lane does not yet have a liquor license, so alcohol is BYO. There is glassware however so no need to bring wine glasses with you.

Will there be seating?:
Everyone will be seated and there is no standing room. There is no reserved seating so seating is on a first-come, first-served basis – so get in early.

Is there parking nearby?:
You can park on Waratah & Lurline Streets and you’ll only be a few minutes walk away. If you would like to first drop off your family & friends at the door, you can drive down Beverly Place and drop all your guests at the door.

Accessibility @ Pigeon Lane?:
There is wheelchair access however call Chris on 0411 954 826 to make your booking as entrance and drop-off will be explained over the phone, and seating will need to be rearranged in Pigeon Lane to accommodate (which we are happy to do – we just need some advance notice).