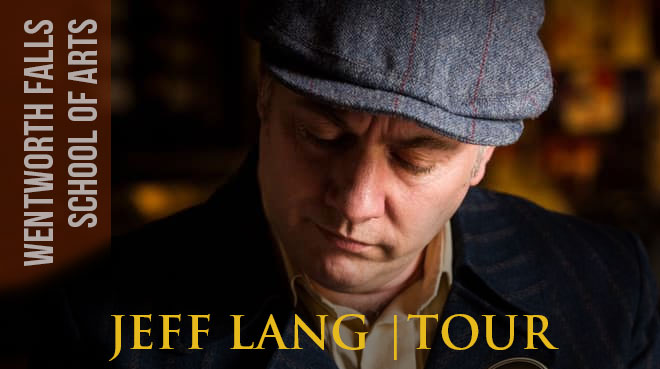 “Australian guitarist Jeff Lang weaves remarkably skilled blues guitar around his songs, effortlessly playing complicated parts but never at the expense of the songs themselves.”
The Onion

“Lang’s only reference point is himself, a unique singer-songwriter-guitarist who follows his own path”
Le Soleil, Quebec

With the music industry in a state of flux, artists are constantly on the lookout to find new ways to release music and earn an income, especially since the dawn of streaming and downloads.
Three time ARIA award winning musician, singer/songwriter, guitar virtuoso and balladeer Jeff Lang has chosen an innovative and relatively new approach of releasing new and previously unreleased music directly to fans through his brand new Patreon Archive page.

Patreon is an online platform where people pledge money to artists they like to help them continue to create music and content. After releasing 17 albums the traditional way via various record labels, Jeff decided to see if he could use the site to essentially run like an independent record shop, where fans gain direct access to unreleased music and other amazing material that has been hidden until now.

For the second half of 2019, Jeff is on a rolling tour visiting capital cites, regional centres and intimate shows in far flung halls, with the idea of connecting with his fans via an extended journey through his extraordinary catalogue of songs, and explaining in more detail how he will be releasing music through his Patreon Archive.

Australian guitarist-songwriter-vocalist-producer, Jeff Lang has built a reputation for making startling music that is accomplished, intricate, gutsy, melodic and loaded with soul. Often taking unexpected turns, he has consistently inspired his audiences by creating a stylistically diverse catalog of over 25 albums.

As legions of journalists have written, Jeff is not one to be easily pegged, though in a general sense it’s fair to say he largely trades in roots-oriented rock; wider reaching in collaborations with the likes of roving guitar anthropologist Bob Brozman, American blues-rocker Chris Whitley, India’s desert-dwellers Maru Tarang and world music virtuosos Bobby Singh and Mamadou Diabate. Jeff’s work with the latter won the 2010 ARIA (Australia’s Grammy) for Best World Music Album, while he and Brozman took one home for Best Blues and Roots Music Album in 2002. Jeff received that same award on his own in 2012.
Jeff has mischievously called his music ‘Disturbed Folk.’ One writer referred to him as a “quiet achiever.” But the overall impression one has from observing Jeff’s lengthy career is that of a driven man who keeps his head down, playing and recording music as if his very life depends on it.

Outside of his homeland, Jeff has toured the UK, Europe, Japan, India, China, South Africa, New Zealand and Canada as well as concentrated work in the U.S., where he has played upwards of 300 shows, living there for 6 months at a time. He has appeared on prestigious American radio programs A Prairie Home Companion, Mountain Stage and Acoustic Café.
Jeff has shared stages with Bob Dylan, Dr. John, Richard Thompson, Bonnie Raitt, Ani Di Franco, Chris Whitley, Albert Collins, Loudon Wainwright III, Greg Brown, John Butler, AR Rahman and Bob Geldolf, among many others.

Jeff Lang’s unique musical vision easily finds a home in myriad settings, from large festival stages to the intimate, long-running Ann Arbor, Michigan club The Ark to the Sydney Opera House. Most importantly, Jeff Lang has achieved what is a rarity in the cluttered world of contemporary sounds: his own voice.

“Jeff Lang is, in my humble opinion, a national treasure, a truly gifted songwriter and an outstanding guitarist. He has been inspiration to countless Australian and internationally
renowned roots artists and surely has a place in history as one of this generation’s finest.
He has really touched me and musically, I had a kind of revelation…”
John Butler, John Butler Trio