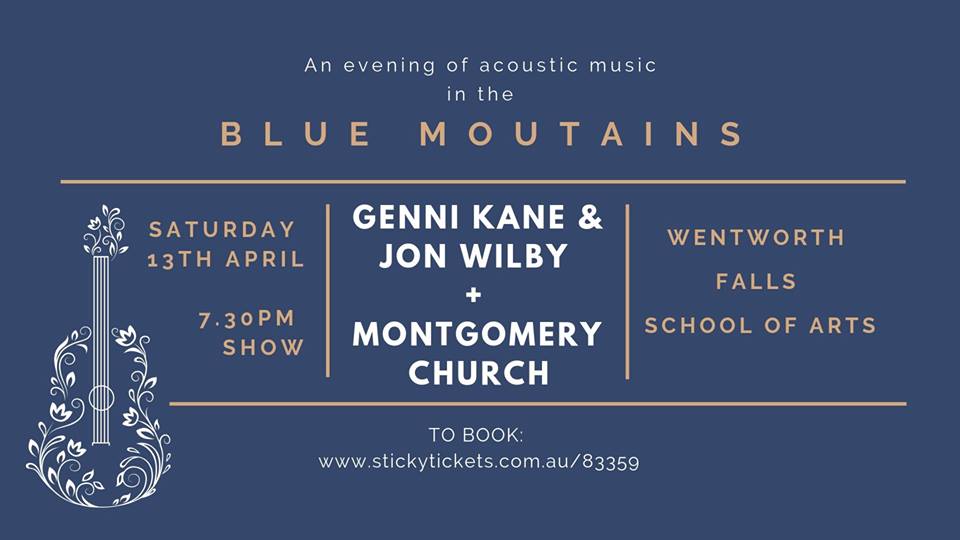 Cielle Montgomery and James Church are ‘Montgomery Church’ – a blend of acoustic folk, americana and bluegrass influences, grown and distilled in the Snowy Mountain ranges of country New South Wales. With their organic union of dobro, guitar, harmony vocals, and thoughtful songwriting, this captivating duo are enthralling in their dynamic intimacy and embrace all that is subtle, spacious, and sensitive.

“Cielle Montgomery and James Church make a rare kind of hill country magic: spinning gossamer tapestries with timeless acoustic sounds, quicksilver vocal harmonies, and the kind of unassuming storytelling that burrows deep into the subconscious. With their glorious debut LP, the duo frequently draws from the same wellspring as Gillian Welch and Dave Rawlings, while also tipping their hats to all corners of the trad. country and Americana compass: Few albums of recent memory plumb such depths of feeling with such exquisite ease.” -Gareth Hipwell (Country Update Magazine)

Genni Kane sang her way through the 80s as a member of the ARIA award winning Flying Emus. She has been writing songs and performing since she was 17 years old. She has written songs for many artists including Flying Emus, Slim Dusty, Jimmy Little, Anne Kirkpatrick and Bananas in Pyjamas. Most recently Genni has been exploring and writing songs at her kitchen table about how she sees the world.

“Some singers act when they sing, frightened to expose themselves. Genni Kane builds a road of truth slap bang in the middle of her songs. Not a highway, mind, but a charming country road with overhanging trees, and at the destination you don’t just find Kane, you feel you get to know her as well, as if perhaps you had shared a couple of bottles of red wine with her.” – John Shand (Sydney Morning Herald)

Jon Wilby has been playing the banjo and various other instruments with strings for over 40 years. He has recently discovered a love of songwriting. His songs are clever, raw, and funny. He is the master of the parody, but also gets into the nitty gritty of relationships.