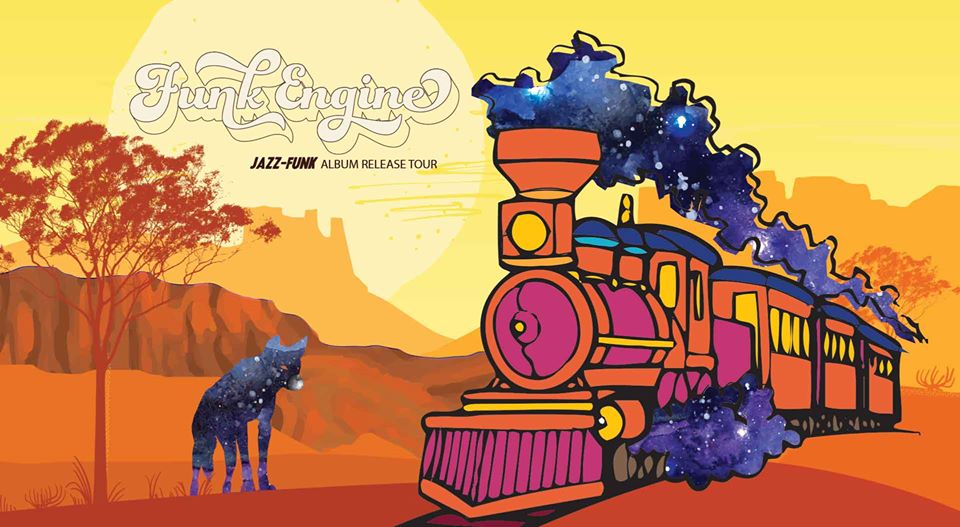 For some musicians funk is where it’s at: It starts and ends with the groove! Funk Engine is one such band. The Sydney four-piece is dedicated to groove-based music, jazz fusion and reggae. The band members all grew up in Sydney except Felix Lalanne who is originally from Byron Bay. The band formed in January 2013 at the Sydney Conservatorium of music being brought together by bandleader, composer and electric bass player, Siebe Pogson. The rest of the band include Holly Conner (drums), Nischal Manjunath (Tenor Saxophone) and Felix Lalanne (electric guitar).

After a nearly a year of rehearsing, Funk Engine debuted at The Newsagency in November 2013 to great success. The small, intimate setting provided the perfect opportunity to release their unique style of groove combined with improvisation. Early in 2014, they secured a residency at Lazy Bones Lounge, Marrickville where they are Sunday night regulars. The Engine have played a range of other venues around Sydney including Hermann’s Bar, Town Hall Hotel Newtown, Mr. Falcons, The Marrickville Bowling Club, Foundry 616, The Oddfellows Hot Club in Kempsey, The Record Crate, The Lewisham hotel and many more. They have also appeared at a number festivals including Beats Music Festival (new year’s 2013), Site and Sound in Leichhart (2015) and Regrowth (2017).

In 2014 Funk Engine released their debut self-titled album under the guidance of producer Llew Kiek. The album was launched to great success in November 2014 at Foundry 616 and since then has had air time on ABC national radio, Fine Music FM, Eastside radio and Skidrow FM. In 2017 they released their second album Taking a Ride collaborating with several different musicians including Sydney rapper DOBBY, vocalists Deiniol Chynoweth, horn players Nick Calligeros and Nick Polovineo and keyboardist Novak Manojlovic.

Aunty Ed’s After Dark:
Like all live music hubs, Katoomba comes alive ‘after dark’, and like all happening live music destinations, you often have to travel off the beaten path to find the most happening joint in town. Whilst in the Blue Mountains, head down Katoomba’s main street and you will find ‘Aunty Ed’s’, the Blue Mountains best underground bar and restaurant (and certainly a local’s favourite). Like all basement live music joints, the vibe is casual, there’s a couch or two to sink into, there’s a crackin’ kitchen if you’re looking for something to eat and the Mountains largest selection of craft beer is on tap and in the fridge. Head below street level at Aunty Ed’s and you’ll also find the Blue Mountains’ cocktail master, Dwayne, shaking a cocktail or two behind the bar.

What sort of live music would you expect to hear in this hidden gem? Don’t expect one genre or another, just get ready for a band that will bring the party your way – the kind of act that will make you wanna get on your feet and cut loose. This is a FREE EVENT, there will be some space for dancing and it’s certainly not a quiet night in. So stroll down to 122 Katoomba Street and join ‘Music in the Mountains’ on the 2nd Saturday of every month between 9:00pm & 11:00pm. No reservations needed (first come, first served) – just grab your friends and tell them to meet you at your favourite Aunty’s place!